Along came a spider...

Headless Halloween
Are You Terrified Yet? is the ninth book in the Goosebumps Series 2000 book series. It was published in 1998.

The cover illustration shows a jar full of spiders, and one of the spiders is standing on top of the jar, drooling venom.

The easily frightened Craig Morgenstern has just moved into the town of Middle Valley with his family. After years of being tormented by his classmates, and being called names like C-C-C-Craig, Craig is ready to leave his cowardly past behind him. However, his wish to be seen as something of a superhero is granted quicker than he expected.

As Craig rides his bike to school one morning, a car comes out of nowhere, hurtling towards him. Craig hears the cries of a baby, and alongside, the shouts of its mother. In a daring act, Craig stops the vehicle from crashing, saving the baby inside. Overjoyed, the baby's mother hails Craig a hero, calling his actions "the bravest thing she ever saw".

His act of heroism doesn't go unnoticed by his new classmates either. At school, he meets Amy Suskind and her friends, Travis Walker and Brad Caperton. Amy is pretty, and even better, seems to have taken a liking to Craig. The two become friends, but Craig's newfound popularity is not without its downsides, especially after Craig begins to brag about his actions.

As Craig's reputation for bravery spreads around town, Travis and Brad become determined to prove Craig isn't what he seems. Jumping to his defense, Amy bets the two that there's nothing they can do that will frighten Craig. Amy dares them to come up with something that will scare him, to which Travis and Brad gleefully accept.

While hanging out at Amy's house, Craig is given his first challenge, along with a nasty surprise. Travis reveals his cousin went to Craig's old school, and now he knows Craig is a fraud. Craig tries to deny the accusations of being a scaredy-cat, but before he can do so, Travis and Brad pull out a large, glass jar. To Craig's horror, he sees it contains dozens of repulsive-looking spiders. The two tell the now sickened Craig that he has must stick his hand in the jar for a sum total of five minutes. Craig is reluctant but realizes he has no choice.

Sticking his hand in the jar, things seem fine at first, but his nerves quickly get the best of him. Attempting to pull his hand out, Craig finds it stuck in the jar. However, this ends up working to his advantage and Craig lasts the whole five minutes, winning the challenge, and leaving Travis and Brad discouraged. Craig's string of good luck continues and he begins to wonder if its actions that make someone brave, and not the feeling of courage.

The next day, Amy reveals that Craig will be challenged again. Except this time, he will have to kiss a poisonous snake. When Brad and his friends arrive, they come screaming for help, saying that Travis lost one of his eyes while trying to catch the snake. Craig sees the eye and puts it in his mouth. He then spits it out, and reveals he had seen the exact same eye at the card store as a prop for Halloween.

Travis and Brad's next challenge turns out far more dangerous than the last. The two drag him and Amy to a funeral parlor, instructing him to sneak in through a window and lie down in the first coffin he sees. Entering the building, Craig sits down in the coffin. However, he quickly realizes he's not alone. He sees that beneath him is a corpse. Craig struggles to get out, only to discover the body is a fake. It's really Travis in a rubber mask. Disappointed the prank failed, Trevor exits the building alongside Craig. Before he can celebrate, Amy issues out another challenge for Craig. It's a repeat of this one, except this time Craig will be lying with a real corpse.

When the night of the challenge arrives, Craig is led to another coffin, where the body lies. To win the challenge, Craig must not only lie with it, but give the corpse a hug. Reluctantly, Craig enters, with Amy egging him on. To the groups' horror, the other coffins in the room begin to move. Craig shouts that they have disturbed the dead. The corpses emerge from the coffins, staggering towards Craig and his friends. Travis and Amy beg Craig to do something, as he's the only brave one there. Amy shoves Craig into the horde of zombies, leaving him all alone as they run off into the night.

Shortly after, Craig pays a visit to Brad, where it is revealed it was all an elaborate joke, the zombies were really Brad's brother, Grant and his friends. But as they celebrate, Grant walks in and apologizes for not being able to make it, and says that he “left and got pizza”. Realizing that the zombies were real, Brad runs off to puke. Craig and Grant bursts out laughing, as Craig had teamed up with Grant to get back at Brad along with everyone else.

Thanking Grant, Craig remarks he's finally gotten payback on everyone. He departs. now confident that his scaredy-cat self and being called C-C-C-Craig is in the past now. He's finally become the hero he wanted to be. However, as he walks home, he wishes it wasn't so dark. 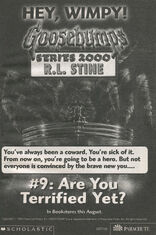 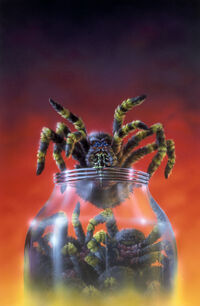