CALLING ALL EDITORS!
This section does not meet Goosebumps Wiki's quality standard. Please help the wiki by cleaning up this section and rewriting it.

Andy meets a boy named Evan and they quickly become friends. They head to town to visit an old toy store and inside Evan finds a can of 'MONSTER BLOOD'. They buy it then later play with it in Evan's Great Aunt Kathryn's backyard. They accidentally feed the Monster Blood to Evan's dog Trigger, which makes him not feel well. Evan then encounters the bullies Rick and Tony Beymer in the neighborhood. Andy tries to help Evan but she gets knocked down in the scuffle. The bullies leave, and she goes home to attend a scrape on her leg.

Later, Andy and Evan find that the can of Monster Blood is overflowing. They play it a bit then clean up the mess. Outside they notice that Trigger has double in size. They take him to the vet, but the vet suggests that he's just experiencing a rare growth spurt. Andy and Evan then realize the Monster Blood is growing at a dangerous rate, so they try scooping it in large buckets. Eventually, the black cat that Evan met in his past turned out to be an evil witch, Sarabeth. The now 10 foot high Trigger then charges ar Sarabeth and pushes her into the Monster Blood, followed by the Monster Blood shrinking to a puddle. Before Evan leaves to get to his parents, Andy asks if she could have some Monster Blood as a memento. But when they stop to get some... it was no where to be found.

Andy stays with Evan in Atlanta when her parents decided to visit another country. She shows Evan a can of Monster Blood, but Evan persuades that it's too dangerous to open again, so they bury it in a park. Later they get to idea to feed Cuddles the Hamster a bit of Monster Blood to get payback on Mr. Murphy. They return to the spot they buried it, but soon discover it's missing. Evan suspects a bully named Conan Barber stole the Monster Blood, so both the children sneak into Conan's house. It turns out he did take it and they promptly steal the Monster Blood back. Evan changes his mind about getting back at Mr. Murphy, but Andy goes through with the plan anyway and feeds Cuddles the Monster Blood.

A few days later, Cuddles is destroying the school, and Evan and Andy are worried. Evan steps up with a plan, but it fails, so Evan eats some Monster Blood and fights Cuddles, and he ultimately wins. Evan goes home and celebrates the victory with Andy and Mr. Murphy gives Cuddles to Evan because Evan was so kind. In a twist, Andy has more Monster Blood sent from her parents from Germany, and Cuddles eats some.

Andy meets Kermit, Evan's annoying little scientist cousin. He does lots of bad things to Evan, such as hurting Conan. Since Conan hates Evan, he hurts him instead for payback. So now Andy and Evan want to get revenge, but before that Kermit puts jokey answers on Andy's homework and Andy's teacher said that they were incorrect and Andy needed to learn more math. That's when the kids had enough and Andy gets more Monster Blood and shows Evan. Evan hesitated at first but some time later he agreed. They went on with the plan and Andy put some in one of Kermit's mixtures, but the Monster Blood and the mixture explodes, causing Evan to swallow some. This leads to problems at baseball and the police and an angry mob chasing him. Kermit mixes a few potions, and on the 3rd try, Evan went back to normal, but at the end, it was revealed Evan drank the wrong potion and shrank which sadly led to Trigger carrying Evan into the living room.

Andy helps Evan out with Kermit due to Evan's parents going to Tucson, Arizona for a week. As a practical joke she launches rubber snakes into Evan's face in Monster Blood cans. One night, Andy sneaks into Kermit's House and wakes up Evan and Kermit. She now has a can with real Monster Blood that they open, which unleashes a blue type of Monster Blood that doesn't grow, but they soon find out it multiplies.

Andy is funny, fearless, and kind of crazy. She is quite mischievous with a love of jokes, really playful and quite tomboyish. She also likes to play jokes on some people — sometimes for fun and sometimes for revenge. There are moments when Andy was quite serious, such as when she and Evan had their run-ins with the Monster Blood. However, unlike Evan, Andy still thinks the Monster Blood is cool, and would always take it out to play a mean joke on someone, in spite of Evan's protests that it is dangerous.

She can also be sympathetic to Evan if he was going through a hard time — such as when Kermit got him into trouble, or when Conan Barber picked on him. When Conan told her that the name Andy was a boy's name, Andy asked him what kind of a name Conan was while returning his challenging stare right back at him, which surprised Conan and also made him wonder how she knew him.

Andy really likes bright colors, and wears bright-colored clothes. Many kids initially laughed at her for this, but then changed their minds, and a few of them even began to copy her look, as they started to think she had style.

Andy explained to Evan that she hates being called Andrea because it sounds so stuck up, like she should be wearing a corduroy jumper with a prim, white blouse and walking a toy poodle. So she makes everyone call her Andy.

Andy as depicted on a Topps trading card. 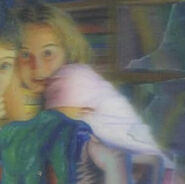 Andy as depicted on the first Dutch release of Monster Blood.

Andy as depicted on the second Dutch release of Monster Blood. 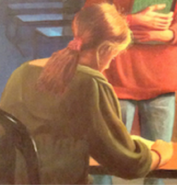 Andy as depicted on the Dutch release of Monster Blood II.