Daniel Goodfellow
Andrew Craw is a thirteen year old headless ghost boy. For most of the story it seems that he is the main antagonist of the thirty-seventh Goosebumps book, The Headless Ghost, and its television adaptation. Though while his story drives the plot, he only appears at the very end.

Andrew was a nasty brat who lived in a house haunted by a ghost, and liked to play mean pranks. One day, he found the hiding place of the ghost, who pulled off his head as a punishment. Ever since then, his ghost searched for his missing head until it was found by Stephanie Alpert and Duane Comack. There are many tales of gloomy disappearances in the house following his demise, but whether or not they really happened or were invented to increase the haunted house's appeal is not known. When a boy (or probably another ghost, it remains unclear) named Seth was pretending to be him as a prank, he threatened to take one of their heads.

Andrew's role remains mostly similar to that of the book. However, by the episode's end, Stephanie and Duane discover Andrew's head inside the dumbwaiter of the Hill House attic. He still lives in Hill House alongside the ghosts of Seth and Otto.

Andrew (who is referred to as The Headless Ghost) appears as the main villain of the game. The object of the game is to defeat him by sending him flying.

The Headless Ghost doesn't make a physical appearance, he only appears in a portrait, it's a framed picture of a Headless Ghost, the player has to develop the photo of the head in the dark room, once this task is done, the player must place the picture above the headless portrait, and the player will earn another chess piece. 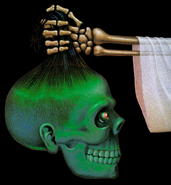 Andrew as depicted on the French cover of The Headless Ghost.

Andrew as depicted on the Korean cover of The Headless Ghost. 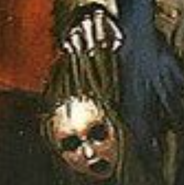 Andrew as depicted on the Japanese cover of The Headless Ghost.
Add a photo to this gallery

Andrew as seen in the TV series.

Andrew without his head.

Andrew, Seth and Otto.
Add a photo to this gallery
Retrieved from "https://goosebumps.fandom.com/wiki/Andrew_Craw?oldid=152728"
Community content is available under CC-BY-SA unless otherwise noted.