Mike Carbone
Amaz-O is a magician who made his first appearance in the forty-first Goosebumps book, Bad Hare Day, and its television adaptation. He is the idol of Tim Swanson.

In the beginning, Amaz-O was at the height of his fame. He became the most brilliant magician in the world and he had appeared in the top TV shows. A lot of people had looked up to Amaz-O, except for a sorcerer named Frank, whom people never took seriously because he was kind of ugly. Frank was jealous of Amaz-O and he wanted to be famous like him and he wasn't, so he turned Amaz-O into a rabbit. To make matters worse, Amaz-O was only a magician, so he wasn't powerful enough to reverse Frank's spell. But Amaz-O was determined not to let that stop him, so he built a mechanical dummy and made it look like his former self and continued doing his shows as before, only with the dummy looking like he's the magician. Amaz-O had been real bitter ever since he had been turned into a rabbit and he was determined to not let anyone get too close and discover his secret, fearing it will jeopardize his career and reputation.

After a show where Tim Swanson was a volunteer, Tim stole his bag of tricks. His sister Ginny ate two bites of a carrot from the bag and turned into a rabbit. Tim returned to Midnight Mansion to find out how to reverse the spell, and after revealing his secret, Amaz-O told Tim that it simply wore off after a while. Tim then asked him if he could join his magic act, and Amaz-O agreed. However, Tim became the rabbit, while Amaz-O retired.

Amaz-O appears in Return to HorrorLand at a magic show in HorrorLand, doing magic tricks.

Amaz-O makes an appearance in Goosebumps: The Game. After the player returns to the tunnel entrance to their neighborhood, a rabbit appears. The player must give the rabbit a top hat; such a hat can be found at the crashed moving truck. After receiving a top hat, the rabbit stands on two legs and begins talking. The rabbit reveals that he is Amaz-O before disappearing.

In his human form, Amaz-O is Caucasian, tall and slim with long black hair. He wore a black cape lined with red satin over a black tuxedo and a top hat that made him seem even taller. In his current form, he is a big, white-furred rabbit.

Amaz-O acts in just the way a magician would always act, always entertaining his audiences and making them laugh as he went on. However, the way he talks about his life as a magician has shown a clear sign of arrogance and he has proven to have a pretty bad temper. Amaz-O had been really bitter ever since he had been turned into a rabbit as it really gets on his nerves and he would always yell at someone to go away if they are about to enter a room he is in. The truth is, he doesn't want anyone to get too close and discover his secret, for fear that it might ruin his career. Amaz-O considers kids to be stupid, but there are moments when he is friendly with them. 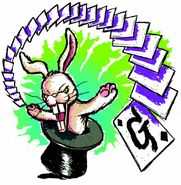 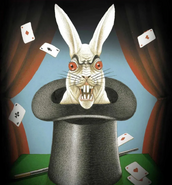 Amaz-O as a rabbit as depicted on the French cover of Bad Hare Day.