Checkout Time at the Dead-End Hotel
Alone in Snakebite Canyon is the twenty-sixth book in the Give Yourself Goosebumps gamebook series. It was published in 1998.

The cover illustration depicts a giant rattlesnake about to strike. There are several other rattlesnakes in the desert behind it.

Better yet, want to be an eagle? Or a bear? Or a fish? Then check out the souvenir shop in Snakebite Canyon. They've got a pair of dried-up snake eyes with the power to turn you into a real animal.

Maybe you'd like to buy a map of the lost gold mine. You could strike it rich. Or you could get attacked by a giant kid-eating spider!

You, your parents, and your annoying older brother Pete go to Lonestar National Park. While camping in the desert, you find a shop and can buy one of two valuable items. One is a pair of magic snake eyes that allow the wearer to transform into different animals. The other is a map to an old, deadly gold mine. If you choose the magic snake eyes, you may transform into any of several different animals including a bear, a fish, and a falcon, while the choice of the map results in the necessity to solve a riddle.

There are seventeen bad endings, one ambiguous ending and six good endings. 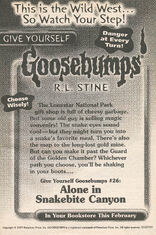 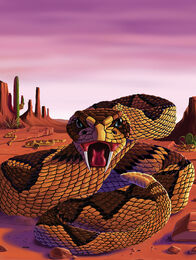 Retrieved from "https://goosebumps.fandom.com/wiki/Alone_in_Snakebite_Canyon?oldid=150400"
Community content is available under CC-BY-SA unless otherwise noted.