Danger Time
All-Day Nightmare is the forty-second and final book in the Give Yourself Goosebumps gamebook series. It was published in 2000, and was the last Goosebumps book in general released up until the Goosebumps Graphix book, Creepy Creatures in 2006.

The cover illustration depicts a werewolf trying to reach something way up in a tree. The werewolf already has made claw marks in the tree bark trying to climb it. Two other werewolves are on the ground with him.

Whoa! You had terrible nightmares last night. Horrific images run through your head as you struggle to wake up.... But wait! This isn't your bedroom. You're stuck in some creepy old house and what's worse you can't even remember your own name!

Do you sneak out the window or hide in the attic? If you leap, you'll face the aliens who took away your memory. Better run before they re-zap you with that mind-ripper machine. Creeping up to the attic might be a better idea...if you don't mind facing a hungry bunch of werewolves who think you look just like lunch!

According to author Scott Westerfeld, All-Day Nightmare was (at least partially) ghostwritten for R. L. Stine.

Westerfeld claims that this book is his work [1]. Westerfeld is known to have ghostwritten many books early in his career, and he claims that he wrote five Give Yourself Goosebumps books [2] [3]. Scott Westerfeld has even signed copies of the book All-Day Nightmare [4].

It is unknown if Westerfeld's claims are valid; however, the Give Yourself Goosebumps series is known to have been the product of several ghostwriters with assistance from R .L. Stine [5].

After having had horrific dreams, you wake up and find yourself in a creepy old house you have never seen before. You realize that you have no memories and no idea who you are, where you are, or how you got here. A boy your age arrives and since he can't remember his name, you decide to call him Max. You discover that Max is in the exact same situation as you and had the same dream, but before you can figure out why, you hear someone knocking on a door below you.

You open the door and are instantly attacked by two huge guys in suits. You and Max manage to knock them out despite them being many times your size. The two of you search for clues to your identity and discover that you are secret agents involved in the production of a teleportation device called a Matter Slammer. But the men are still after you, and there's an enemy agent on the loose ...

You stay hidden, but try to sneak to the top of the stairs to see who was looking for you. You're confronted by a hunter commanding an army of mysterious dolls, all armed with silver weapons. This storyline involves you turning into a werewolf, and depending on your choices you can either join other werewolves to fight the hunters pursuing you; or join the hunters and try to find a cure for yourself.

From story B, you don't look to see who is downstairs, and instead try to hide (either under a bed or by climbing out of a window.) You are subsequently ambushed by aliens that had abducted you, and have to find a way to escape them.

There are twelve bad endings and nine good endings. 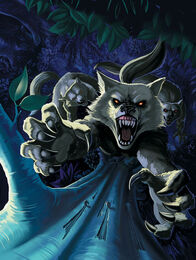 Retrieved from "https://goosebumps.fandom.com/wiki/All-Day_Nightmare?oldid=153131"
Community content is available under CC-BY-SA unless otherwise noted.