Keegan MacIntosh
Alex Hunter is the protagonist of the sixtieth book in the Goosebumps series, Werewolf Skin, and its accompanying television adaptation.

Twelve-year-old Alex Hunter is an aspiring photographer from Cleveland. His parents, who were called out of the country for work, needed a place for Alex to stay. They end up sending him to Wolf Creek, so he can live with his Aunt Marta and Uncle Colin for a few weeks. Luckily for Alex, his aunt and uncle are also photographers. With Halloween approaching, Alex hopes that he will be able to take a scary photo to enter into a Halloween photo contest.

Upon arriving in Wolf Creek, Alex is excited. However, he notices several strange things. First, his aunt and uncle immediately panic when he mentions the possibility that he will dress as a werewolf for Halloween. Second, his aunt and uncle's neighbors, Mr. and Mrs. Marling, seem incredibly illusive and live inside an unkempt house. Thankfully, Hannah Stoneman, one of Aunt Marta and Uncle Colin's other neighbors, is much more friendly.

One night, after forgetting his camera in the woods, Alex goes outside, and he hears an animal ferociously attack another animal. He later finds tattered animal remains. He heads back for his aunt and uncle's house, and he unintentionally spots animal footprints leading to the Marlings' house.

The next day, Alex goes to the local school, as he promised his parents he would. On his way to school, Hannah tells Alex that the Marlings are werewolves. At school, the teacher even talks about werewolves. He says that the moon doesn't have to be full for a werewolf to come out. At daybreak, werewolves must shed their wolf skin and hide it away.

Eventually, Alex decides to sneak out to investigate the strange occurrences going on next door. He sees two figures emerge from the Marlings' house wearing capes. The figures transforms, and Alex follows them into the woods. At the end of the night, the werewolves return to the house where they originally came from, and they return to their human form. Alex is shocked when he sees that the werewolves are actually his aunt and uncle. The couple returns their werewolf skins to the building that is supposed to be the Marlings' home. Alex explores the "Marlings'" house, and he learns that it's abandoned, finding only the two werewolf skins inside.

Alex loves photography and exploring. Alex is good-natured, but he repeatedly sneaks off to investigate the strange occurrences of Wolf Creek, despite his aunt and uncle disapproving of this. Alex is at first skeptical about werewolves being real, but his own curiosity has him eventually discover the truth.

Not many physical descriptions are given about Alex throughout the book. When Uncle Colin meets Alex at the beginning of the book, he says that Alex looks especially grown-up. At multiple points throughout the book, it's hinted that the protagonist has medium-length to long hair.

In the episode, Alex has blue eyes and medium-length, blond hair. 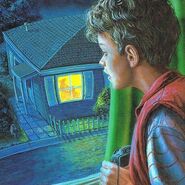 Alex as depicted on the Dutch cover of Werewolf Skin.
Community content is available under CC-BY-SA unless otherwise noted.
Advertisement