It's a real dead end.

The Haunted Mask II
A Shocker on Shock Street is the thirty-fifth book in the original Goosebumps book series. It was first published in 1995.

Both the original 1995 and 2015 Classic Goosebumps cover illustrations depict one of the Giant Praying Mantises on Shock Street with its forearm on a stoplight and its rear left foot on a car. The art is indicative of 1950s monster B-movies.

Erin Wright and her best friend, Marty, love horror movies. Especially Shocker on Shock Street movies. All kinds of scary creatures live on Shock Street. The Toadinator. Ape Face. The Mad Mangler. But when Erin and Marty visit the new Shocker Studio Theme Park, they get the scare of their lives. First their tram gets stuck in The Cave of the Living Creeps. Then they're attacked by a group of enormous praying mantises! Real life is a whole lot scarier than the movies. But Shock Street isn't really real. Is it?

Erin Wright and her best friend, Marty, are fans of the horror movie franchise Shock Street. Both are ecstatic to discover that Erin's father is the designer of a new theme park based on Shock Street. Mr. Wright reveals that all of the attractions will include animatronic robots, and he wants his daughter and Marty to be the first kids to visit the park. Erin asks him if Mom can join them but Mr. Wright responds strangely, then says that they are better off with just two people.

When they arrive at the park, Erin and Marty meet their tour guide, Linda. She gives them red toy guns and says that they can be used to freeze monsters. The kids will get to view the park from a tram, but they will be riding on the tram alone. Once aboard, the tram takes the two friends to a haunted house. The house ends up being a roller coaster. Because the tram doesn't have any seat belts, both kids almost fall off of the vehicle.

As they leave the haunted house, several stars from the Shock Street franchise approach Erin and Marty. The monsters offer sign autographs. The tram ride continues to the "Cave of the Living Creeps". Inside this cave, the two friends are attacked by large white worms and giant spiders, which are animatronics. The tram unexpectedly stops in the middle of the cave, so Erin and Marty decide to leave.

While searching for a way out, Erin and Marty encounter several giant praying mantises that are capable of spitting a gooey black substance. Erin and Marty step on the mantises' legs to defeat them. Finally, the kids find a way out of the cave. However, Erin and Marty discovers that they're now on Shock Street, the place where their favorite horror movies take place.

Marty decides to visit the cemetery, only to fall into an open grave and be attacked by hundreds of zombie hands that emerge from the ground. Erin manages to save him, and both friends escape from the cemetery. The kids realize that they need to find the park's main building so they can get help or even escape. The duo decides to scale a stone wall so they can gain a vantage point from which they could survey the park's layout. However, as they climb, both kids slip and fall into quicksand.

Just when all hope seems lost, Erin and Marty are rescued by Wolf Boy and Wolf Girl, two more stars from the Shock Street franchise. The kids slowly realize that the werewolves are too lifelike, possibly even real. The werewolves try to attack, but Erin finds one of the red toy guns and uses it to freeze both creatures... But the gun turns out to be useless. The kids reascend the wall in order to escape the wolves. After doing this, they spot their tram in the distance. Erin and Marty run to the tram while being chased by the werewolves. Fortunately, the kids get to the tram unharmed. Unfortunately, Erin and Marty discover that the tram is now full of living skeletons trying to attack them. They also notice that the tram is about to crash into a stone wall, so they jump off before the tram crashes.

Erin and Marty continue walking, and they eventually return to Shock Street. Both kids worry that they will be trapped forever. Suddenly, the park director, Russ Denver, appears and tells them that the filming has been a success. Erin is confused about what has happened. Mr. Denver explains that everything that happened in the park was being filmed and will actually be a part of a new Shock Street movie that will star the two kids.

Erin demands to see her father. Mr. Denver tells her that she and Marty will have to go through an attraction called "Shockro's House of Shocks" to find him. Erin hesitates because she knows that, according to the Shock Street films, anyone who enters the building will be instantaneously shocked by a thousands of volts of electricity. Marty begins running to the attraction. Meanwhile, Erin notices a giant plug behind Mr. Denver. When the plug is pulled, it is revealed that Mr. Denver was a robot. Erin tries to warn Marty, but it's too late. Marty is hit by thousands of volts of electricity and falls to the ground. Erin sees her father and runs to him to ask for help. However, Erin stops talking correctly. Soon she stops moving entirely.

Erin's "father" tells his co-workers that the Erin and Marty robots have stopped working properly. While he inspects them, he discovers that the cause of the malfunction was damaged chips. He had stated that something was wrong when Erin asked about mom, even though she was not programmed to know of a mother. Mr. Wright says that, as soon as the chips are recharged, Erin and Marty will be ready to finish testing the Shock Street theme park, and eventually they will be able to open up the park to real kids. 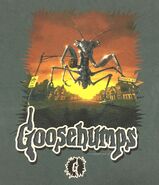 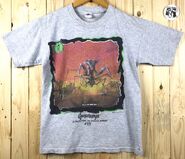 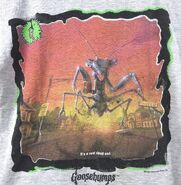 A Shocker on Shock Street was adapted into a Goosebumps Graphix story in March 2007 by Jamie Tolagson, as the second story in Terror Trips. 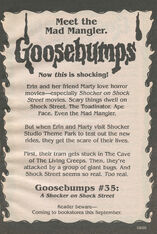 Book advertisement from Revenge of the Lawn Gnomes. 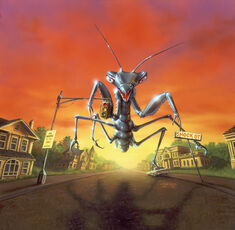 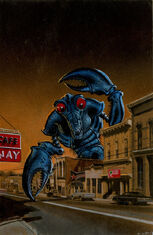