Night of the Puppet People

A Nightmare on Clown Street Is the seventh book in the Goosebumps Most Wanted book series. It was published in 2015.

The cover art shows Murder the Clown dodging blood-stained axes while more blood is visible behind him.

Ray Gordon really likes the circus. His uncle, Theo, is a performer in Koko's Klown Academy and he invites Ray to come join him for the summer. At first, Ray's parents are reluctant - they know their son has a habit of getting himself into strange situations. But Ray manages to convince them that he'll be in his best behavior.

The circus itself is very cool. The clowns stay in their makeup all day and only go by their clown names. Ray becomes a clown-in-training named Mr. Belly-Bounce. But the longer he's there, the scarier things become. There are whisperings about a place named Clown Street and nobody, including Murder the Clown, wants to go there. Will Ray be able to survive the dark secrets of the circus?

The story begins with Ray “Ray Gun” Gordon and his friend, Heather James sneaking out of Ray’s house at night. They attempt to enter illegally into a circus but are caught by a huge clown ironically named Tiny. Ray talks to Tiny for a while, until his father interrupts, saying that he had been looking for Ray.

Later that night, Ray and his parents argue about a card his uncle Theo sent, inviting Ray to Koko’s Klown Academy, the circus where Theo works. Ray manages to convince his parents and, at the beginning of the summer, he goes in a trip to the circus. Uncle Theo shows him the circus, and Ray sees a large tank filled with water, with a big sign that reads “Dunk-A-Klown”. A clown is perched on a seat high above the water tank. In front of the tank, a teenage boy is throwing baseballs at a target. Ray starts toward it, but Theo grabs his arm and tells him not to look. But then, one of the balls hits the target. The clown’s chair collapses, and the clown falls into the water. Ray sees a look of fear on the clown's face. The water in the tank starts to sink, and the clown disappears.

Ray asks his uncle where the clown went, but Theo ignores him, and tells him to keep moving. They walk a little more, and then they go lunch at the food tent. All the clowns goof and kid around, but then a big and eerie-looking clown enters the tent. It's Mr. HahaFace, the boss of Koko’s Klown Academy. After all the clowns leave the food tent, Ray and his uncle start toward the trailer where Theo lives, but suddenly a knife comes flying at Ray’s head. Luckily, the knife misses, but no one knows who threw the knife. Murder says it’s probably just a joke, but Ray is not fully sure.

Later, Ray is given the clown name Mr. Belly-Bounce, and told that he can’t take off his clown makeup during the day. Ray is then introduced to his roommate, a clown named Bingo-Bongo. A few hours later, he meets Deanna Banana, a clown girl to whom Ray talks to about Mr. HahaFace. They talk for a while, but then Bingo-Bongo calls him, and says that Deanna is Mr. HahaFace’s daughter. That night, Ray hears a whisper coming from outside his trailer, calling his name. He goes outside, but only to stumble and fall facedown into a pile of fish intestines.

The next day, after breakfast, he returns to his trailer to get his clown shoes, but his uncle tells him there’s no problem in rehearsing for the show without the shoes, so they go to the main tent anyway. After the rehearsal, Ray walks to the trailer, but then he finds his clown shoes, completely sliced in half. He asks Bingo-Bongo if he was the one who sliced his shoes, but he swears he doesn’t know who did it.

A few hours later, it is time for the circus show. All the clowns do their roles, but at the end, Ray accidentally trips over Bingo-Bongo’s shoes, knocks Mr. HahaFace, and falls heavily in the top of him. Although it was an accident, the audience loved it, and everyone started cheering and laughing. But, after the show, Mr. HahaFace tells Ray he needs to see him, and pulls Ray to inside the tent. He talks angrily at Ray, saying that what he did wasn’t funny. Ray defends himself, telling the ringmaster it was an accident and he tripped over Bingo-Bongo’s shoes. But Mr. HahaFace gets him wrong and thinks that it was all Bingo-Bongo’s fault.

Ray attempts to explain to him that Bingo-Bongo didn’t do it on purpose. However, Mr. HahaFace then thinks Ray was only trying to protect his roommate, and tells Ray he could return to his trailer. He leaves the tent, and finds Deanna Banana. They go eat hot dogs, and then Ray sees Bingo-Bongo perched on the seat of the Dunk-A-Klown tank, with a terrified look on his face. A man hits the target with a ball, and Bingo-Bongo disappears into the water.

Ray and Deanna return to the circus, and Ray runs toward the tent, to find out that Bingo-Bongo was replaced by another clown named Dr. Phooey. Ray asks him where did his roommate go, and Dr. Phooey says Bingo-Bongo went to a place called Clown Street. A few minutes later, Ray walks toward his uncle’s trailer, to find him washing off his Murder the Clown makeup. But when Ray sees Theo’s real face, he turns out to not to be his uncle. The “fake Theo” explains everything, telling Ray that his real name is David Ford, and that Ray’s uncle was sent to Clown Street by Mr. HahaFace, a few days before Ray arrived to Koko’s Klown Academy, so Mr. HahaFace told David to replace Theo, to make Ray believe that he was his uncle.

Ray decides he has to rescue his uncle from Clown Street, and plans to anger Mr. HahaFace enough to make him send Ray there immediately. He walks to HahaFace’s trailer, grabs a banana cream pie, and smashes it against him, while he was sleeping. But when the clown takes off the cream of his face, Ray sees he wasn’t HahaFace, but a clown named Tommy Teardrops. Tommy asks why Ray do did, and Ray explains everything. Tommy says it’s too late, because once you go to Clown Street, you would never leave. But Ray is determined to save Murder the Clown. He finally realizes exactly how to get there, and takes off running to the Dunk-A-Klown tank.

Ray starts to climb the water tank. However, that’s when he sees Deanna Banana stepping quickly out of the shadows. She tries to stop Ray by grabbing his arm, but he jerks free. She then explains Ray she is on his side, and tells him that she was the one who threw the knife at him and made him fall into the fish guts and sliced his clown shoes. Ray thinks that she wanted to hurt him, but she says she was trying to help and warn him. So Ray says that if she wanted to help him, she could threw baseballs and hit the target, to send Ray to Clown Street.

She finally agrees, unhappily, and starts throwing balls. She hits the target and Ray is flushed quickly into an even larger water tank. A few seconds later, Deanna also splashes into the water tank. Ray is surprised for her being there, but they don’t have much time to talk, because a giant mutant squid shows up from behind them.

They fight the squid and Deanna pokes one of her knives into the squid’s eye, killing it. They then notice applause. They peer through the glass wall of the tank and see people clapping and cheering to them. Before they have a chance to move, two huge clowns grab them and take them to the “Clown Street Hotel”, which is nothing but a prison for clowns. Ray and Deanna hear a roar from a cage, and see two gray-uniformed guards dragging a clown down the prison hallway. The clown was begs the guards not to be thrown into the bear cage, but the guards ignore him.

A clown in a cell next to the kids utters "poor guy", to no one in particular. Ray turns to him, and sees it was uncle Theo. Theo, in his Murder the Clown costume, tells them the whole story. There is a guy who everyone calls The Frightener. He owns Clown Street, and he built it because he is so afraid of clowns, he wants to kill them all. Mr. HahaFace works for him, sending clowns to here. The Frightener made every clown walk through a machine that sends out a ray that makes the clown makeup permanent, so it can never be removed. He forced all the clowns to entertain him and his family and guests by fighting the squid or the bear, while The Frightener’s friends cheer and laugh. And when the clowns weren’t fighting for their lives, they went entertain at kid’s parties. The Frightener keeps the money the parents pay, to support his prison.

When Theo finishes talking, The Frightener’s voice rings out from a loudspeaker. He says that his nephew Freddy is having a birthday party, so the clowns have to entertain the kids at the party. Ray suddenly has an idea and tells Theo and Deanna his escape plan: When they arrive Freddy’s house, instead of making the kids laugh, they would make them scream. The Frightener would hear the screams and enter the room. Then the clowns would surround him, and The Frightener would be petrified.

Some time later, the clowns all leave the bus and enter Freddy’s house. They act as scary as possible, but the kids laugh and laugh instead of screaming, as planned. The Frightener ends up entering the room suddenly, asking why all the laughter, and the clowns seize the opportunity. They jam up against him and force him into a corner, laughing maniacally.

The Frightener begins to scream and run, crying, out of the building. The clowns cheer and laugh and also leave Freddy’s house. They are all free now. When Ray arrives home, he wants to tell his parents about the adventure he had and about how he saved the clowns from Clown Street. However when he attempts to wash his face, the clown makeup won’t come off. He anxiously starts to yell for his parents. 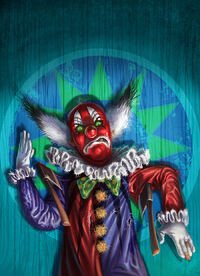 Retrieved from "https://goosebumps.fandom.com/wiki/A_Nightmare_on_Clown_Street?oldid=126967"
Community content is available under CC-BY-SA unless otherwise noted.